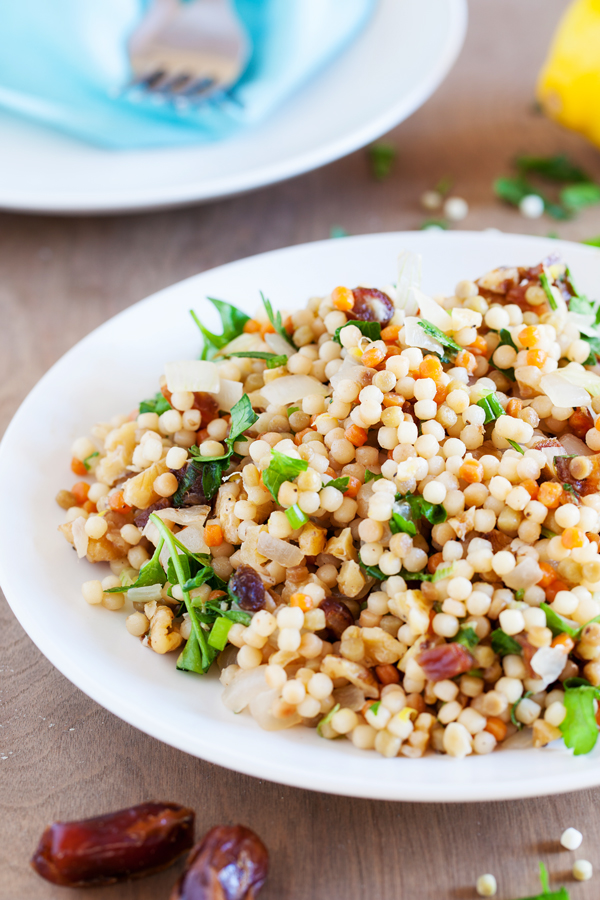 I think Israeli Couscous gets forgotten about, and it offers a great shape, texture and canvas for flavor. I immediately think of golden raisins.

Some of you might be wondering what is couscous? Well, couscous is small steamed granules of rolled durum wheat semolina. It shares a lot in common with pasta. Couscous is a North African dish. Original couscous is hand-made.

But, Israeli couscous is machine made, a perfectly round pasta with delightful chewiness. In Israel, it is also known as ptitim, giant couscous or even pearl couscous. It is made up of semolina flour and water.

Israeli couscous is generally served as a side dish however it is also enjoyed as pasta with green pesto or red tomato sauce.

Both original and Israeli couscous is made with semolina flour and water but the difference lies in the shape and size; the original couscous is much smaller and irregularly shaped as compared to the Israeli couscous. The original couscous as mentioned above is traditionally made at home by kneading and rolling the flour dough into small, irregular sized balls. The resultant pasta-like dough is then steamed and served with various sauces or even mixed with vegetables for it be enjoyed as a wholesome meal.

On the other hand, Israeli couscous has always been produced by machines. They are bigger in size than the original one and also have a soft and chewy texture.

Now, let us jump straight into the recipe!

• 1 cup dry couscous
• 1 and a ½ cups of water
• Oil of choice; can also use butter
• Few garlic cloves
• 1 onion finely chopped
• Herbs such as rosemary and bay leaves

Couscous is a very experimental dish on its own. You can cook a lot of dishes with it. It is perfect as a side dish as well as an easy lunch on its own. In this article, we have brought to you several dish ideas and recipes as to how you can enjoy Israeli couscous in different ways.

Various other ways of serving couscous

Couscous is in a very close manner similar to pasta. Just like pasta, you can serve couscous with basil pesto sauce or red tomato sauce or even white cheesy sauce. You can boil couscous with beets in order to make it pinkish in colour so that kids can also enjoy the dish, serve it with beetroot. Another very famous way of having couscous is with fried eggs. You can also make a salad by mixing couscous with vegetables of your choice, I like to add cucumbers, tomatoes, some mint leaves, feta cheese topped with some fresh lemon juice, black pepper and salt, mix well and enjoy a healthy and super delicious dish. Some toasted couscous mixed with pistachios, pine nuts, chewy raisins, cinnamon powder topped with lime juice also tastes incredibly good.

One fun fact of Israeli couscous is that it was originally developed in the 1950s by their then Prime Minister David Ben-Gurion as a way to feed the immigrants who came to Israel!

Later as years passed by many new recipes and new ways of enjoying this dish came up and became popular. In different countries, couscous is enjoyed in different ways. Here we have shared Israeli way of making it. Hope you all enjoyed the recipe! 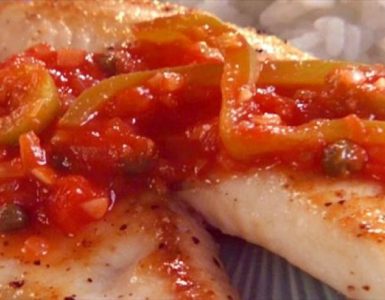 This Spanish influenced dish is a baked fish covered in a tomato sauce flavored with European ingredients like olives, garlic, capers and more. The traditional way to serve Veracruz Fish is alongside rice or potatoes... 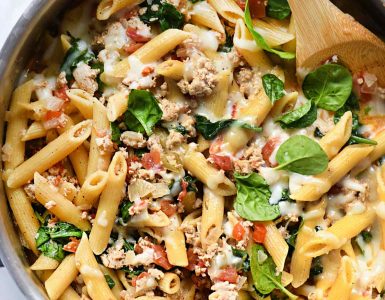 Kill 3 birds with one stone… I created this dish when living alone after college. It was quick, easy, healthy, and offers up all food groups. I obviously ended up with leftovers every time, and almost preferred it a day... 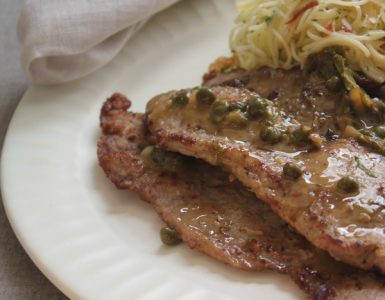 My dad always cooks this when he comes to visit me in Dallas. I crave it often so I’ve finally mastered his technique and I’m thrilled to share it with you! The key is to pound the flour into the veal so that it sticks...